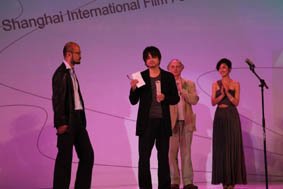 “Birthright” is nominated for Competition in World Strand at East End Film Festival in England, which is going to be held from April 27th, 2011 to May 2nd!

In the “Competition” of the 13th Deauville Asian Film Festival, there are 3 other nominees of Japanese films besides 「Birth Right」,which are 「Cold Fish」direted by Shion Sono, 「Norwegian Wood」directed by Tran Anh Fung, and 「Sketches of Kaitan City」directed by Kazuyoshi Kumakiri.

We will screen our film in the “Special Screening” section in Osaka Asian Film Festival which will start from March 5th, 2011.

「Birth Right」will be screened in the “FIVE CONTINENT” Section on Feb.4th,5th,and 6th 2011.

We will screen our film in the “FIVE CONTINENT” section in Goteborg International Film Festival (Sweden) which will be held from Jan.28, 2011.